Last night I read this article that talks about the past, present and future of sustainable agriculture on Puerto Rico. The top of the article introduces us to a man named Raul Rosado who, like Paul and me, escaped his day job and got into farming. Also like us, part of what influenced Rosado was the farming scene in Utuado.

It's not clear whether the farmer Rosado met in Utuado was organic or not (the author Lisa Munniksma, doesn't name this Utuadaño or tell us much about him), but from the looks of the photo in the article, as well as the Facebook friends he and I have in common (who are organic farmers), I am inclined to believe Rosado is doing organic farming.

The article then goes on to give mostly accurate information about Puerto Rico's history with farming (which largely consists of residents on the island and our beautiful land being exploited first by the Spanish and then the Americans—both of whom colonized our island. Indeed we are still a U.S. colony. Lisa talks about the debt crisis, but doesn't indicate why we're in it. She essentially glosses over that part. This made me suspicious.

She spoke of the move toward sustainability and all the efforts made by locals, grass roots organizations, the University of Puerto Rico and the government to move us in the right direction.

To the unsuspecting and those who are completely unaware of the realities and complexities that actually go on here, Munniksma paints this lovely utopian picture that includes local farmers walking hand-in-hand with special interest groups to create a brighter and fully sustainable future for our beleaguered island.

I wondered whether she was referring to the same island Paul and I have lived on for eight years.

When she used comments made by our friend and mentor Sadhu Govardhan completely out of context to pit him against those who claim to be doing good for our island (special interest groups, not organic farmers) but who in fact are raping it, I knew something was seriously wrong.

Sadhu has a excellent reputation among those of us on the island who are either working toward or who have achieved sustainability. Ask anyone in our very small circle about Sadhu and he is regarded as highly knowledgable. Some say he is the most knowledgable on the island. I know when we're stuck on anything, we think nothing of contacting him. And he thinks nothing of helping us. He wants to educate us all. He never withholds information that can help Puerto Rico and those of us who love it the same way he does. 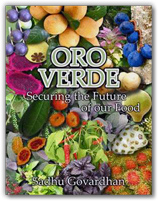 Sadhu Govardhan is the author of Oro Verde - Securing the Future of our Food. He lives in Puerto Rico and works as an agricultural consultant in Puerto Rico and surrounding islands. He is the first person in the Caribbean who has worked with over 500 tropical fruit crops, as well as hundreds of bamboo, vegetable and herb species.

Contrary to how Munniksma describes him, Sadhu is not Puerto Rican. That name is definitely not Spanish.

Initially I thought Munniksma was just being naïve and that she really believes the intentions of the Department of Agriculture are completely altruistic, or she didn't know the real meaning of sustainable, but now I am convinced otherwise. Munniksma lumped us organic and sustainable farmers in with those who use chemical fertilizer, herbicide (essentially RoundUp) and pesticides, but she does so in a very sneaky manner. I believe she did this to help promote the efforts of the powers that be who are in bed with both biotech and Monsanto, not to help us but continue to exploit us.

This paragraph, taken from her article, which is strategically placed after two paragraphs that talk about Rosado's efforts in organic farming and about a company that sells organic seeds, would lead anyone who doesn't know the reality of the situation to believe the agriculture mentioned in this paragraph is organic.

In addition to an increase in home gardening, however, Rosado has seen an increase over the past two or three years in large-scale monocultures and conventional agriculture. Corn, especially, is more visible now. Dairy is, by far, the largest sector of Puerto Rican agriculture, valued at $189.4 million. Plantains—grown on more than one-third of Puerto Rican farms—are the next most important crop, bringing $80.5 million to the market. Poultry, cattle, coffee, and bananas follow in popularity. Watermelons are also making it on to the scene.

The reality is that the majority of those on the island who are growing plantains, bananas, papaya, avocado, pineapples, citrus and other fruits both for sale and for personal consumption use Department of Ag supplied chemical fertilizer and buy herbicide and pesticides.

We routinely see people wearing a gas mask while they spray to control weeds that encroach on their fruit trees. This image is a common occurrence.

And it's not as if they're unaware what they're doing. They frequently ask us why we don't use veneno, pronounced bo-nenno. It is the Spanish word for poison.

We used to buy coffee from our neighbors until they showed us the pesticide boxes in their shed. If our coffee trees don't yield much in one year (it's not our main focus), we either go without or trade with friends who want something we have that they don't, like goat cheese.

The reality of the situation is that those of us who are organic and sustainable on the island are in the serious minority. Whether we're referring to those who have a few trees of bananas, avocados, breadfruit and papaya to supplement what they buy in the stores, those who have several acres and are growing their own food and those who are selling their yield to grocery stores and restaurants, finding the few organic farmers in the bunch is akin to finding the allusive needle in a haystack.

This is the comment I left on Lisa Munniksma's article, which have unsurprisingly not been approved on the article (don't know if she has control over that or the publisher of the article, Civil Arts does).

Puerto Rico is not moving toward sustainability. The reality is: those of us who are, do so knowing we are grossly outnumbered by the plantain/coffee/avocado/pineapple, etc. farmers who use chemical fertilizer & other incentives from the department of Ag and who buy herbicide and pesticides by the gallons. Those products rape the land, pollute our water & poison the food. And I haven't even touched on the antithesis of sustainability: Monsanto, DuPont et al.

You misrepresented Sadhu Govardhan's comments to bolster the "good" offered by the programs you mentioned. For the outsider, you described utopia, when in actuality it's a travesty against Puerto Rico.”

It's important we speak out when injustice occurs. Whether it's against animals, people of color, women or mother earth, it's our duty.

View all posts by: Sarah Ratliff